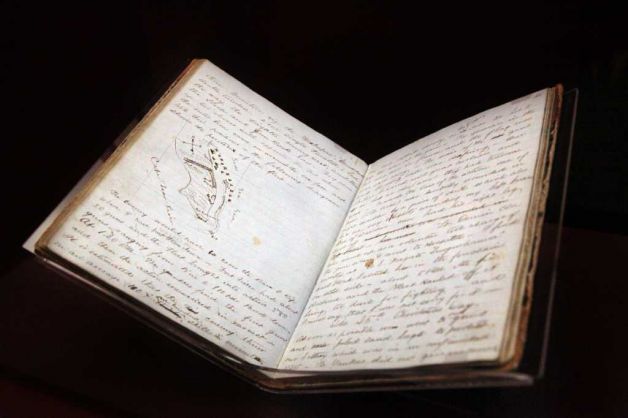 The exhibit displays letters, diaries and photos; “terse resignations by career soldiers off to defend a new nation; lofty documents of freedom; and a stark arsenal of tools of death.”

The above image credit:

The war diary is opened to an entry for Christmas Eve 1864, where he details his experiences defending Fort Fisher off the coast of North Carolina as the crew battled Union ships. The diary belongs to Confederate Midshipman Clarence Cary and wrote entries while part of the crew on the CSS Chickamauga. according to the National Archives, Records of Boundary and Claims. War diary on display in the Discovering the Civil War exhibit at the Houston Museum of Natural Science on Wednesday, Oct. 12, 2011, in Houston. ( Mayra Beltran / Houston Chronicle ) Photo: Mayra Beltran / © 2011 Houston Chronicle

Next post: Letter Written to Lieutenant in the 92nd Illinois Infantry by Sister