I may not make it there right away, but seeing that its close to home I will before the end of the year I hope! 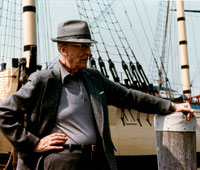 December 20, 2010 — An inventory of papers and correspondence of Bruce Catton, widely regarded (along with Shelby Foote) as the most popular of America’s Civil War historians, is now accessible online through the University of Wyoming American Heritage Center.

There are no access restrictions on the materials for research purposes, and the collection is open to the public.

Catton (1899-1978) was a newspaper reporter in Cleveland and Boston before working for the War Production Board and the U.S. Department of Commerce during World War II. The first of his 15 Civil War histories was published in 1951. His “A Stillness at Appomattox” won both the Pulitzer Prize for history and the National Book Award in 1954. He was an editor with “American Heritage” from 1954-1978.

A description and inventory for this collection, accessible at http://rmoa.unm.edu/docviewer.php?docId=wyu-ah04032.xml , contains correspondence, research and biographical materials and other items related to Catton’s professional career and personal life.

The AHC is the University’s repository of manuscripts, rare books and the university archives. Its collections focus on Wyoming and the Rocky Mountain West (including but not limited to politics, settlement and western trails), environment and conservation, the mining and petroleum industries, air and rail transportation, the performing arts (particularly radio, television, film and popular music), journalism and U.S. military history.