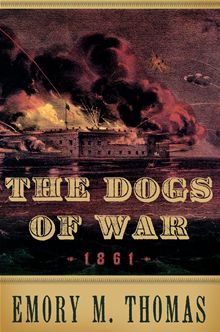 There was essentially a failure or breakdown of the political machine that caused one part of the United States to start to break away from the rest after the legal and undisputed election of Abraham Lincoln in 1860. The failure of the ability to compromise (as had been accomplished in 1820, 1850) existed within a “martial moment,” historian Emory M. Thomas notes in, The Dogs of War: 1861. There was a failure to understand the potential conflict, a failure to consult the proper military assets, and a failure to anticipate the “unintended consequences” that inevitably result in civil war.

Thomas nicely lays out the thought process (or lack thereof) surrounding Lincoln’s push to enforce the Constitution, defend sovereign Federal property, and in essence wage a war on the country itself. Lincoln was naive, inexperienced, failed to surround himself with the best supporting cast, and most importantly, for quite some time consistently underestimated the resolve of the South, “believing the majority of Southerners were uncommitted Confederates.” [p.51]

Thomas does an excellent job showing that one of the few who clearly understood the task at hand (and its potential to be long and bloody) was none other than Confederate President Jefferson Davis. While many in the North and South openly proclaimed the war would be short, Davis privately wrote of possibly a much longer and more arduous struggle. [p.91] Davis, however, underestimated the resolve of Lincoln and of the North’s ability to fight the war he had envisioned.

However, though Thomas does a succinct job in presenting his thesis (the book stands at 113 pages total including the Index), he fails to provide what the Oxford Press materials proclaimed was a “provocative book.” I looked numerous times but could not find those provocative aspects within the book. That both sides underestimated the other’s resolve, that Lincoln overestimated the South’s average citizen’s loyalty to Union, and that Davis early on was a better Commander-in-Chief, are nothing new or extraordinary and certainly not provocative.