The Civil War: A Concise History 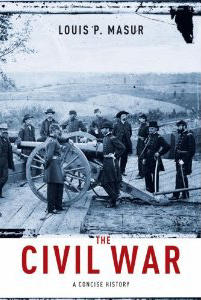 Louis P. Masur’s The Civil War: A Concise History offers a masterful and eminently readable overview of the war’s multiple causes and catastrophic effects. Masur begins by examining the complex origins of the war, focusing on the pulsating tensions over states rights and slavery. The book then proceeds to cover, year by year, the major political, social, and military events, highlighting two important themes: how the war shifted from a limited conflict to restore the Union to an all-out war that would fundamentally transform Southern society, and the process by which the war ultimately became a battle to abolish slavery. Masur explains how the war turned what had been a loose collection of fiercely independent states into a nation, remaking its political, cultural, and social institutions. But he also focuses on the soldiers themselves, both Union and Confederate, whose stories constitute nothing less than America’s Iliad . In the final chapter Masur considers the aftermath of the South’s surrender at Appomattox and the clash over the policies of reconstruction that continued to divide President and Congress, conservatives and radicals, Southerners and Northerners for years to come.

The fine folks at Oxford sent me Louis P. Masur’s The Civil War: A Concise History and I have to admit when I first looked at it I was bewildered that anyone would have the audacity to write a “concise” history of our Nation’s second greatest struggle and do so in less than 100 pages (not counting the bibliography, notes, and index.) Even though the book was accompanied by quotes of paise from Gary W. Gallagher and James M. McPherson, I was still skeptical. After reading it, I am rather happy they did send it! Masur’s book is every bit as good as Gordon S. Wood’s concise history of the American Revolution, The American Revolution: A History (Modern Library Chronicles). The first chapter of Masur’s book, Origins of the American Civil War, is as fine of a presentation as I have read: succinct, forceful, concise, and effective. I will be sure to offer this to my A.P.U.S. History class next year as a select reading. I highly recommend the book as it is just published and on sale!

Previous post: The Common Soldier of the Civil War Webcast

Next post: Voices from the Past: The American Civil War