Interview: The Uncivil War: Irregular Warfare in the Upper South, 1861-1865 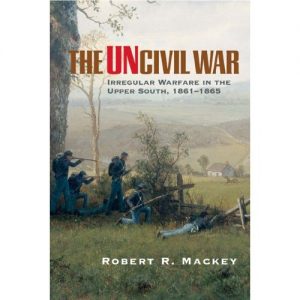 The Uncivil War: Irregular Warfare in the Upper South, 1861 – 1865 (2004), by Robert R. Mackey, is a scholarly study that sought to establish a proper context for the irregular war that the South attempted to fight, but ultimately lost. (This also explains why they could not continue the guerrilla war after Lee surrendered.) It is Mackey’s contention that historian’s treatment of the irregular war that took place has been flawed by inadequate definitions. They have attempted to take present examples, Vietnam for one, and apply them to the South. Additionally, most Civil War military historians treat guerrilla warfare as an aberration. Mackey uses case studies to make his point: the Guerrilla war in Arkansas; John Mosby and his Partisan Rangers; Morgan and Forrest in Tennessee and Kentucky, and Great Raids, Great Reforms, and Great Disasters.

I got the chance to correspond with Mr. Mackey and here is that transcript:

Did the American Civil War see the first emergence of modern guerrilla warfare?
I don’t believe so, and I say this for a couple of reasons. First, irregular warfare had been an important part in European and American military experiences in the 18th and 19th centuries. For example, Napoleon’s experience in Spain was well known to both Union and Confederate leaders in the Civil War. If you mean by “modern” the type of guerrilla war fought by Mao or Ho Chi Minh, definitely not. The irregulars in the Civil War era lacked several things: instant communications (radio), a cohesive ideology (the somewhat esoteric idea of States Rights just doesn’t have the staying power that world-changing Communism had in the 20th), and external support. Neither Mao nor Ho could have survived without extensive external assistance. Had the Confederacy went to a large scale irregular war, it would have had to depend upon external (European) arms and equipment to fight the Union”and the possibility of them gaining any sort of support from Europe was nearly impossible, even when they could field conventional armies and act like a civilized nation. Imagine how hard it would have been for the South to have gained support for a bunch of unorganized irregulars running around the hinterland of North America.

Arkansas was ideal for guerrilla warfare, so why didn’t the South provide more support? It was there that it had the best chance of succeeding, yet they failed to grasp its importance. As you mentioned, they all but abandoned the state.
Arkansas was the perfect environment for a guerrilla war. It was isolated, provided a variety of terrain for defense or hiding, and had a fairly divided population when it came to the war itself. I believe the main reason the Confederacy failed to grasp the importance of the state was their overwhelming focus on Virginia as the main theater of war. Arkansas, Texas, the Indian Territory and much of Louisiana were seen as areas to keep Federal troops occupied and to gain men, material and supply fromâ€”all to support the armies of Northern Virginia and Tennessee. In my opinion, the Confederate government did these things for a very good reason. Richmond, Atlanta and parts of Alabama were critical industrial areas and provided most of the war materials needed to fight a conventional war. Arkansas, western Virginia and even Kentucky could be considered the periphery of the conflict — an area to maneuver forces to keep the Federals out of the heartland. This led to numerous conflicts between Jefferson Davis and Arkansas governor during the war to be exact, Governor Rector threatened to secede from the CSA after the defeat at Pea Ridge, as Davis was ordering what was left of Van Dorn’s and Price’s forces to Tennessee.

What about the influence of cotton in Arkansas and the Trans-Mississippi on military strategy? For example, a lot of the retributive burning of houses and towns happened during cotton gathering expeditions along the Mississippi.
Cotton played an important motivating role for some of the Federals”the well-known stories surrounding General Banks’ Red River Campaign come to mind. In the Trans-Mississippi, cotton was one of the major money crops and it was desperately needed by the North to keep the mills working. For the South, it was one of the few things of value as a trade good to Europe. Having said that, some Federal units gained quite a reputation as looters”the Mississippi Marine Brigade spent much of its brief career on expeditions up the small rivers in the region, wreaking plantations and seizing everything they could get their hands on, then burning the rest.

How key is the presence of an ideological component for guerrilla warfare to work?
As I mentioned earlier, ideology is the critical piece that the South lacked to run a widespread guerrilla war. Gary Gallagher’s excellent The Confederate War outlines how the CSA lacked a cohesive nationalism during the war. The often ignored internal divisions of the CSA played a huge role in sapping what little national spirit the South had. Ironically, it wasn’t until the entire “Lost Cause” mythology was born in the decades after the war that the South gained a centralizing theme that could have led to nationalism. Simply fighting because Federal troops are in your county wasn’t enough for most Southerners”this was obvious after Appomattox, when the combination of relatively soft terms for the surrendered armies and the lack of mass retribution against the Rebel leadership drained the motivation needed for a postwar insurgency. It wasn’t until radical Reconstruction began that there was any real resistance.

Is guerrilla warfare an end in itself or is it best used when a part of a grand military strategy?
A successful guerrilla war is one part of a grand strategy. Even the modern guerrilla leaders Mao, Castro and others realized that a bunch of peasants with rifles was not the desired end state; what they wanted was a conventional army and legitimacy for their governments. In the Civil War era, irregulars were used by most countries as adjuncts to their conventional forces. Partisans, for example, were recognized as legitimate members of the opposing armies, while guerrillas, in contrast, were considered criminals.

Why did the North succeed in finding a strategy that worked against guerrilla warfare? Was it simply a matter of better field commanders or the presence of a grand strategy?
The key was the development of competent junior officers from regimental commanders down that were basically left alone to fight their own private wars. The most successful part of the Federal strategy was the use of indigenous “Unionist” forces in the counter-irregular role. For the senior leaders (Grant, Halleck and Lincoln), these forces were relatively useless against organized CSA troops (the 1st Arkansas at Prairie Grove comes to mind). So, they were left behind to police the respective regions. Locals would know who was loyal and who was not, and this is one of the big reasons why units like the 1st Arkansas Cavalry (Union) could do so well against the Confederate guerrillas.

You talked about military constraints as one reason for the South’s failure to fight and win a guerrilla war. There also wasn’t an ideological component, as you mentioned, that existed. How much of a factor were Victorian era values, their ideals of chivalry and honor, as restraints against a guerrilla war? You don’t really get into that, I was wondering why?
The main reason I avoided this topic in the book was the problem with finding substantive evidence of restraint due to personal honor. In the backcountry, away from the cosmopolitan areas of Richmond or Charleston, the Civil War was a hard war and was brutal, it was vicious and would have been considered appalling by people even today. Both sides were guilty of what would now be called “war crimes.” Entire communities were put to the torch by both sides without a single thought of chivalry. The war being fought on the battlefield had its own rules and in general these were followed. But outside the main, the war was a civil war at its worst. Part of this was that both sides accused the other of atrocities and then both sides used the incidents to justify their actions.

I have a hard time seeing how the Partisan Ranger Act applied to the guerrilla war in Arkansas. I say this because Arkansas was not a part of the grand strategic plan of the Confederate military.
The Partisan Ranger Act was meant to legitimize what was already happening in the upper South; irregulars were forming to fight the invaders. However, what the Act meant to do was bring these forces under a centralized command structure and to maintain some semblance of control over them. It was an absolute failure. Lee would later push for the revocation of the Act for everyone but Mosby, as he saw them as detrimental to the Southern cause on many different levels (from an easy way to avoid conscription to their undisciplined behavior). As to Arkansas, the bushwhacker war had already started well before the PRA was approved; for that matter, southern Missouri had been a problem area since John Brown appeared in Kansas.

What I really appreciated about your book is the care you take in creating a “contex” for the reader. Now that you have made an excellent argument for developing a better understanding of the Civil War, in terms irregular warfare, where do we go from here? What needs to be explored next to continue this forward movement you have established?
Well, when I’m not working 12-hour days on the Joint Chiefs of Staff. I believe that the Civil War has to be in the context of the period. The Lost Cause mythos, the push for national unity, and the decades of romanticizing the war have done much to taint how we historians see the conflict. We all suffer from our environment; I know I do in my writing (which tends to be less narrative and more military in nature). Historians have to be careful to place themselves in the era in which they are writing vice attempting to template their present experiences onto the past; many who wrote about irregular warfare in the Civil War tended to equate guerrillas in that era with those of the 20th century. I believe “non-professional” historians are doing some excellent work, especially when it comes to material history and the life of the common soldier. Honestly, it is the amateur historians who are doing much of the groundbreaking work on the war, while many professionals have seemingly quit writing on the conflict, believing that the war had been over studied.