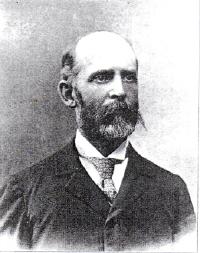 Charles H. Weygant’s history of the 124th New York Volunteer Infantry Regiment (titled “Orange Blossoms”) was years ago linked to have, at the very least, “suggested” the idea for Stephen Crane’s famous novel The Red Badge of Courage. It is probable that Weygant’s regimental history was also influential in some of the events as portrayed by Crane in his novel.

Published in 1895, The Red Badge of Courage, is still considered one of the best books dealing with the Civil War to this day. Crane’s fictitious 304th New York Regiment, according to historian Charles LaRocca, eerily mirrors that of the 124th as depicted by Weygant in his history.

The story of the Novel begins with its author, Stephen Crane, who in 1878 as a boy moved with his family to Port Jervis, New York, Orange County. According to LaRocca, “Local tradition has it that as a boy he liked to listen to veterans who gathered in the town park. Most of these men would have been former members of the 124th New York State Volunteers. An imposing monument to the Orange Blossoms, as the unit was called, still stands in the park.”

The evidence is pretty impressive. First, the Orange Blossoms Like Crane’s unit, first saw the “elephant” at Chancellorsville. However, as LaRocca admits, “No diary entry, letter, or conversation proves that these Orange Blossoms were the model for Crane’s work, but the pieces fall together to suggest it strongly.”

However, the name of Cranes book is itself a clue. Henry Fleming, the main character, receives the “red badge of courage” which was also known as the Kearny patch. As LARocca points out, “The 124th wore the red badge; in fact, it was the only untried III Corps unit at Chancellorsville that ever wore the badge—just as Crane’s 304th had been untried before the battle he describes.”

But the main piece of evidence is the narrative of Crane’s novel, for as LaRocca points out, “If Crane patterned his 304th on the real 124th, their actions should roughly coincide. They do.”

Previous post: Regimental History of the Week: Glory Was Not Their Companion