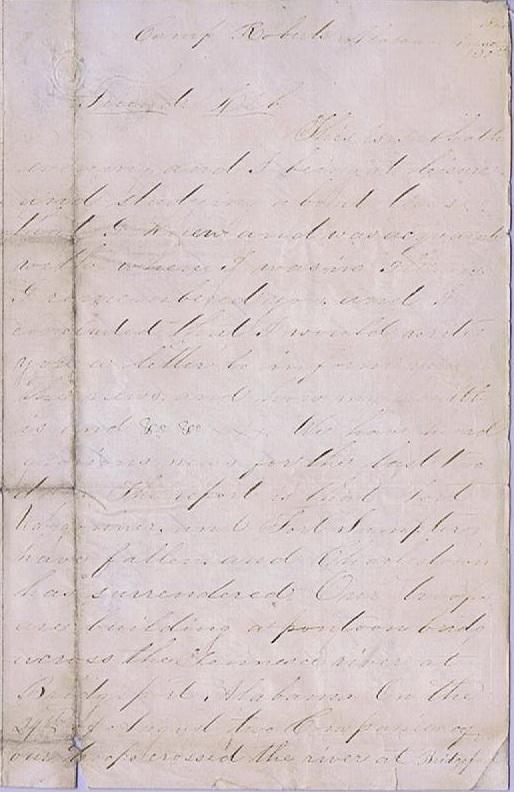 Here’s a faded and unsigned letter (last page missing) so that it is not usable in the database. Written by a Federal soldier at what looks like “Camp Roberts” which was located near Bridgeport, Alabama (NE). I’m not familiar with the camp so if anyone has information, please respond. Anyway, the content is useful so here it is:

evening and I being at leisure and studying about those
that I knew and was acquainted with when I was in Illinois
I remembered you and I concluded that I would write you
a letter to inform you the news, and how my health is and
etc etc xxx We have heard grievous news for the last two
days The report is that Fort Waggoner and Fort Sumpter
have fallen and Charleston has surrendered. Our troops
are building a pontoon bridge across the Tennessee River
at Bridgeport, Alabama. On the 24th of August two
Companies of our troops crossed the River at Bridgeport

(p2)
and landed on the Island occupied by the enemy pickets.
A line of rebel sharp shooters attempted to dislodge the
two Companies but a few well placed shells from our
Artillery on the Heights This side of the River compelled
them to retire to shelter. Ours and the Rebel Pickets
occupied the island but one hundred yards apart until
yesterday, eight Companies of our cavalry forded the river
and went over there yesterday and captured Twelve rebels.
A dispatch from near Chatanooga says that the observatory
by the signal corps elicit the following. But few troops
remain in the City probably not more than one regiment.
The train of cars have just arrived and A paper published
in Nashville called The Nashville Union says that

(p3)
Chattanooga is evacuated. There are so many rumors and
reports in Camp that a person can not tell any thing about
it whether it is so or not. The troops are all in high glee over
the news. General Rosecrans was here today. Him and
General Sheridan went across the Tennessee River. All of
this Army Corps is across the Tennessee River except our
Division. Davis’s Division crossed the Tennessee River at
Stephenson, Alabama This morning. The river is very low.
There has not been any rain fall here for several days. The
weather is cold. The Ther-mometer is down to 58 degrees.
This is getting to be a very unhealthy place. Scores of
soldiers are sick in the hospital.

(p4)
There have been several deaths since we have been here it
makes a person feel so solemn to hear the drums and fife
and see the crowd going along with corps to inter it in its
final resting place in a strange land in an enemys country.
My health has been on the decline ever since we left Camp
Shaffer, Tennessee. I have been unable to make any duty
for the last week. I can just walk around about Camp and
that is all. One cause of so much sickness is The water that
we have to drink. The water is very bad and scarce at That.
There is only one Spring now and That is Three quarters of
a mile from Camp. There was Three springs but two has
gone dry. We have not got much duty to do here…

Next post: Regimental History of the Week: The 33d Iowa Infantry Regiment 1863-6