New Letters of Note in Archives

It seems that we have sickness and deaths in our section of the country to add to our troubles, but we must not grieve about it if we can avoid it, but always look at the brightest side and hope for better days.

But it must be so, and sentiment must succumb to a necessity imposing upon all who care for right or truth or justice. The result of the contest before us is removed from all doubt, for we will eventually succeed, but it requires an effort to do so, and something of valor, courage, and determination.

Jim Wilson of the 96th Illinois wrote on Wednesday, May 18th, 1864, near Culan, Georgia, with Sherman during his Campaign to take Atlanta. This regiment was organized in my hometown of Rockford, Ill.

I am getting tired of this kind of business for nearly three weeks now it has been march and fight all the time. This is a hard campaign and one that is pushing the Rebs to their fartherist point as fast as it can be done. We are all nearly wore out from fatigue and want of sleep yet all in good spirits and willing to push forward and get the matter wound up as soon as possible.

From Kingston to our present locality is heavy timber country grown up with a thick undergrowth and a good position of the time impossible to see a — five paces and the first notice would be a ball whizzing by. Yet we have forced our way thus far and did intend to spend the 4th of July in Atlanta but Johnson has entered his protest. From Dallas here is one continuos line of fortifications. It may be of interest to you to know how we advance and fortify within from — 300 yards of the enemies works. Throw out a heavy skirmish line, drive in the Reb skirmishers or take them prisoners. Gather such material that is found near the lines then strengthening by timber and dirt. In a 1/2 hour we are secure from musket balls if you keep your head low enough.

John Knight of the 7th Iowa camped on Chickamauga Creek, described the carnage of battle:

I have seen some sights since I left Brown’s Mills I have been on the battle fields of lookout Mountain Missionary ridge[81] and Chickamauga[82] there is trees on the chickamauga field two feet through that is tore all to pieces with shell and the trees are speckled with bullet holes I seen one grave where there was three hundred poor fellows was burried and there was old clothes and most everything a lying around yet it was an awful battle and no mistake. 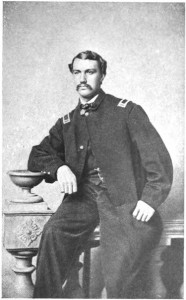 John G. Perry of the 20th Medical wrote while near Brandy Station on Monday, October 12th, 1863:

At three o’clock in the morning we were ordered to move on. The night was of the blackest, the streams were swollen by the rains, and, in the dense growth of trees and underbrush the column broke, men became bewildered and demoralized, lost their way, stumbled over rocks and roots, plunged into ditches and then scrambled out as best they could, soaked with mud and water. Bonfires were lighted to extricate us from our dilemma, but instead set the woods on fire. Sparks flew in all directions, and soon tongues of fire were everywhere. The frightful heat, the dense smoke, and the mad rush of men to free themselves at any cost, made ” Hell.” No other word can describe the scene. By daybreak, however, we worked our way through and joined the main column. So much lost time had to be made up that we could wait neither for rest nor breakfast, and the cold was bitter.