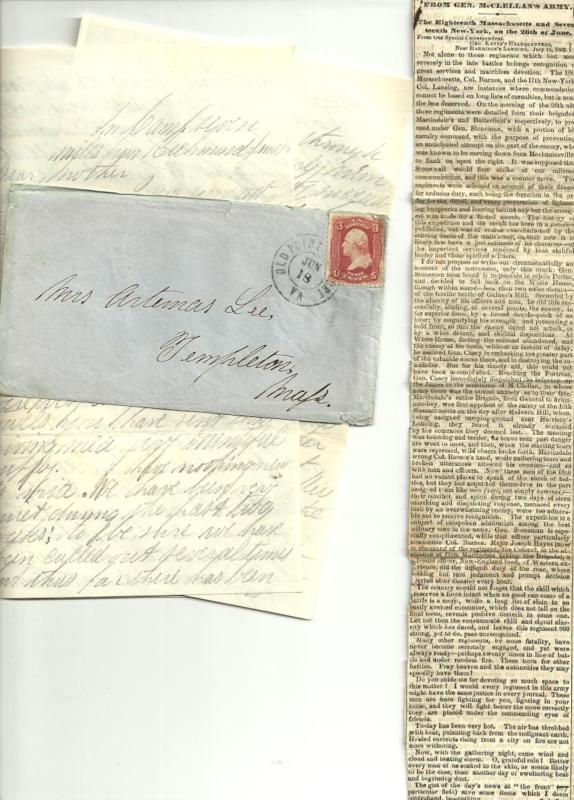 I am sorry not to be able to write this letter from Richmond but McClellan has ordered it otherwise and he must be obeyed.

I have just received two papers and a towel also received a few days since a pair of stockings both of which were very acceptable. All the towels you have sent thus giving me a bountiful supply.

I have nothing new to write. We have been very quiet during the past two weeks; to be sure we have been called out several times but thus far there has been nothing for us to do. Night before last we were called up at one and remained in line of battle until daylight when it was found that there would be no use for us and we then turned in to make up our nap. On Friday afternoon report came in that some Rebels Cavalry had succeeded on getting to out rear between us and White House. In five minutes our division was out ready for any emergency but the enemy proved too nimble and fell back after destroying a few wagons. Last night the 18th went out on —– remained all night. Thus you see we are not sure of remaining at rest two minutes at a time.

I am sorry that our division did not have a chance in the battle of Fair Oaks. Everyone in the Division was aching on orders to move during the whole engagement but they did not come. We had our arms stacked, equipment on and remained thus during the whole engagement. It seems to me that there must have been some mismanagement about that affair. General Casey should not have been placed in that position with raw troops or else he did not exercise proper caution to protect his position, however, it turned out well but it came very near being disasterous to us had the enemy succeeded in breaking through our left it have nearly ruined our army. Had they succeeded they would have been between us and the Paumunkey thus leaving us in a very dangerous position in fact it would have been doubtful if we could have cut through them and made our escape.

The weather is very disagreeable, raining two thirds of the time and the other third in intensely hot but the worst of all are the flies and mosquitos. Some of the latter are as large as bees and a great deal more ferocious. It is not safe for a person to go to sleep without being tied to the tent pole. A few nights since I found myself out of my tent they still carrying me along when I woke.

I can not imagine how soon McClellan is to — the ball but think not until he has so arranged as to capture a greater part of their forces. We all officers and men have the fullest confidence in him and are content to bide his time knowing that when he is ready there will be no falling back.

In reference to money, w have not been paid for several months. I might have sent money home but our rations have been so poor (salt beef and pork and hard bread) that all of us are obliged to get something other ways and everything is so dear that quite a large sum goes but a short distance but one thing I can say, I have not spent one cent since leaving home.