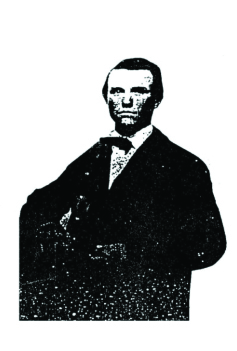 Soldier Studies received a modest, but excellent collection of Letters by a soldier who participated in Sherman’s “March to the Sea.” Here is the intro to the letters written by Lea Marie Rash, who researched, annotated and edited the letters.

The following eight letters were written in 1864 by John Knight. More specifically, they were written during the Union’s Atlanta campaign, one of the most heavily troop-deployed campaigns of the Civil War, leading up to the fierce and bloody Battle of Resaca in Georgia along the Oostanaula River. Indeed, the name Resaca is symbolically evocative of death for one of its meanings is “dry river” in Spanish[1].

John’s sister, Rachel[2] (my great-great grandmother) handed these letters down from mother to daughter until they reached her great granddaughter, Phyllis Schaffer who retrieved the boxed hand-me-down letters out of a waste bin – her elderly mother having thrown them away prior to entering a nursing home in the 1990s. Ironically, they had become “just some old letters”.

Ultimately, the above account is sadly ironic since letters from home were extremely important to John. He knew all too well that the best way to get letters was to write them, and his yearning for them unmistakably increased with each passing day. Like nearly all soldiers in the military[3], John regularly wrote letters home not only to express any incidents of possible interest to his family, but also to reassure them that he was still alive and well. At the same time, because he possessed a limited rural education, John struggled somewhat to write well, to spell words properly and to punctuate. Then again, he wrote with feeling. You will notice a gradual heightening of emotion in his letters as John edges closer to eventually engaging in the battle of his life.

At the time these letters were being written, John frequently addressed and referred to particular family members living in Pilot Grove in his native Iowa. For the sake of reader familiarity with them, their ages and other details are as follows: Father: Samuel Knight, age 44 (raised in Indiana)[4] ; Mother: Lydia Esther Coffin Knight, age 40 (raised in Indiana); Grandfather (Lydia’s step-father): Daniel Votaw, age 81 (raised in Virginia)[5]. Interestingly, John comes from a long line of Religious Society of Friends (Quakers) on both sides of the family. In fact, his parents worked for a Friends School in Pilot Grove, Iowa[6]. Even though Quakers have generally maintained both antiwar and antislavery stances throughout American history, some Quakers, like John, did enlist in the Union Army[7].

John and his siblings included: Jane/“Jennie” age 20 (born in Indiana); John himself age 18; Isaac J., age 16; Sarah M., age 14; Barnabas/“Barney”, age 12; Rachel, age 7; Mary/“Minnie”, age 5 and Elmer, a toddler who turned 2 at the time that John was engaged in combat at Resaca[8].
John’s quill-penned letters were first typed on a typewriter by Phyllis Schaffer in 1994. I have retyped them on a personal computer for this book. In only a few places, the reader will see an underlined blank space as an indication that the first typing was made difficult due to John’s over-crowding of individual letters in words that made them illegible or because the original ink was faded in places and indecipherable.

Introduction to Letter One
John Knight was 15 years old when the American Civil War began on April 12, 1861. Later that summer word would have certainly spread in the community that the Seventh Iowa Volunteer Infantry Regiment had just begun serving the Union Army[9]. John would have gradually begun hearing a profusion of stories about the renowned regiment’s gallantry and heroism fighting with distinction in the Battle of Wilson’s Creek, near Springfield, Missouri (1861), and of the regiment’s battles in such places as Belmont, Missouri (1861); Fort Donelson, Tennessee (1862); Shiloh, Tennessee (1862); and Corinth, Mississippi (1862) among scores of others[10].

Throughout the Civil War the political sentiment in John’s small home town of Pilot Grove remained powerful and intense[11]. On February 20, 1864 when Lieutenant Colonel J.C. Parrot arrived in Keokuk with his regiment[12], word must have spread quickly for two days later, and despite his beloved parents’ distress[13], John left his farm work to enlist[14], as a Private[15] in the Seventh Iowa Infantry Volunteer Regiment of Company D, First Brigade, Second Division, Sixteenth Army Corps. By February 25th, about 200 young Iowan men like John had been mustered for service[16].

Although eager to prove himself as a soldier, John patiently endured the Army’s hustle-then-hold-your-horses policy[18]. While the majority of the Seventh Iowa Regiment had left Keokuk on February 27th by steamboat with Lt. Col. Parrot[19], John’s letter written the same day indicates that his troop had not been included just yet…