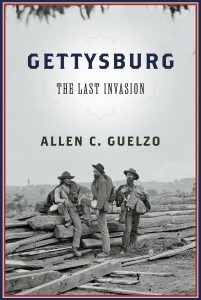 I am not a big “battle study” book guy; I have maybe a shelf and a half dedicated to this genre of historiography. It’s not because it is beneath me, but because they are above me. I am not a military historian on that level. I know the general movements of important divisions and generals for most important battles, but my focus is always with the soldier and sometimes specific regiments. Often battle study books leave me missing the forest for the trees.

But then arrived my review copy of Allen C. Guelzo’s Gettysburg: The Last Invasion. As a teacher,  I use Guelzo’s Lincoln and Douglas book in my APUSH class and though recognized his ability as a historian, I had no idea how good his Gettysburg study would be.

As for Gettysburg I have (sadly) only four books on my shelf, Stephen W. Sears excellent study and Harry W. Pfanz’s trilogy; and on top of that, I have never read any of the four from cover to cover. I skim and pick and choose based on my interest or research specific needs.

So with this in mind I cracked open Guelzo’s book and prepared myself for a good hour or so of reading before I tossed it onto my stack of stuff and maybe got to a review a month or so from now… but then it happened! I encountered a master storyteller who captured my imagination.

Guelzo is a master historian as he is a master storyteller. With regard to history, too often the historian fails to write a narrative that can capture the average reader, hook them, propose questions and offer answers that make sense; this Guelzo does beautifully.

Engaging writing makes sense but also has the sense to make the reader smile, for example, from Guelzo’s Gettysburg: The Last Invasion:

“Elijah White’s solitary cavalry battalion, who probably could not have formed a worthwhile screen even if all of their mothers had asked.”

“The less George Meade saw of Sickles, the happier he was” as he sent Sickles out of mind to his left and in the path of Robert E. Lee.

“Sickles belonged in a novel rather than an army.”

Guelzo sets the stage for the battle in a way that engaged someone like me. He discusses the movement of the armies to Gettysburg with historical and narrative dexterity; he informs the reader with basics about the soldiers who fought, the conditions of the battlefield, and the nature of warfare and military strategy. All the while weaving an informative and entertaining yarn.

Like any important historical event contingency plays the crucial role and Gettysburg was no exception. The ebb and flow of the battle, the furious attacks and counter-attacks, and the acts of heroism and incompetency are all addressed in ease and balance with regard to Union or Confederate point of view.

Guelzo’s observations about military tactics and strategy made sense and brought a whole new level of understanding. Combined that with excellent maps and the battle unfolds for the reader instead of collapsing on itself without a thorough understanding of the movements of so many brigades and regiments.

Guelzo doesn’t shy away from important historical questions, for example, pointing out how loyal Lee was to subordinates and almost to a fault. And Lee’s thinking about tactical maneuvers, and his loyalty to them almost to a fault writing, “whenever Robert E. Lee found a tactical tricked that worked, he liked to keep using it until it broke.” Well, the flanking maneuver broke at Gettysburg… though it almost succeeded as well!

With regard to controversial issues of the battle, Guelzo handles those with astute observations, for example, the absence of J.E.B.Stuart and how did his absence really impacted the battle? Guelzo’s conclusion was fulfilling and honest. No spoiler here! And why is our focus on Little Round Top when the real fighting took place in a wheat field and peach orchard?!

The impact of the battle on the town of Gettysburg, its inhabitants: black and white, is also addressed. Additionally, the location of the battle with regard to Union troops fighting a key battle in their backyard and Confederates on a rare advance into enemy territory was important. I could go on and on…

Previous post: The cause of the Union and the Freedom of five million Blacks