Soldiering in the Army of Northern Virginia: A Statistical Portrait of the Troops Who Served 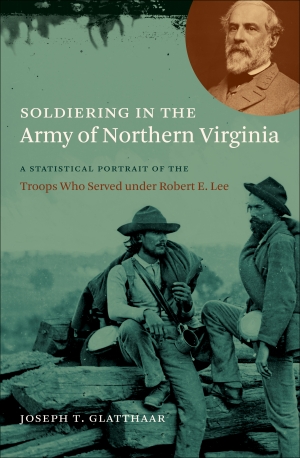 Soldiering in the Army of Northern Virginia: A Statistical Portrait of the Troops Who Served Under Robert E. Lee by Joseph T. Glatthaar. Chapel Hill: University of North Carolina Press, 2011. ISBN: 0807834920. $50.00.

Glatthaar tells us in the Preface to Soldiering in the Army of Northern Virginia that he believes that “Civil War scholarship that focuses on soldiers is stuck.” Continuing he states that as historians we have focused too much on “he said, he said,” and that this selective qualifying has allowed us to “make claims” that may or may not be true. Continuing Glatthaar points out that if “a scholar searches long enough, he or she will find evidence to justify” virtually any conclusion. He therefore proclaimed that his book would hopefully break open what he sees as a “scholarly logjam” with regard to Soldier Studies.

I do not necessarily disagree that there is a need for more quantitative work in the field of Soldier Studies, however, I do not believe a case has been made with Glatthaar’s study for how it reconciles or breaks the perceived “logjam” of historical scholarship. If anything Soldiering in the Army of Northern Virginia muddies the water more than it clears things up.

First, the book. It is an accomplishment to be sure. The amount of data is very impressive, so much so that it is at times overwhelming. If there is a statistical data set about Confederate soldiers you wish to know, it is in this book. The results or findings are not, however, earth shaking or ground breaking. We still know what we knew: rich and poor fought; most Confederates did not own slaves; most were farmers; desertion was highest towards the end of the war; economic hardship was prevalent; ect. The study here deals with a sample of 600 Southern Soldiers. The data is simply massive and Glatthaar does a good enough job in my mind proving that his sample is representative of the Southern Army as a whole.

Looking back at my original hope when I got this book, What is the Future of Soldier Studies? Glatthaar’s work offers a new perspective to the soldier that is data driven and can help be a companion to the more qualitative studies. If we are going to study the “Political Motivations” of soldiers, for example, we need to do our homework and research the data on the political participation on the part of those men before we simply refer to hand selected documents that we will pick and choose from to establish a thesis.