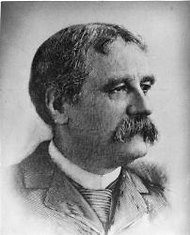 David Hacker of NY Times DisUnion Blog recently wrote an article discussing the issue of Civil War deaths. There have been studies that suggest the death count was higher than the 620,000 or so fatalities that is commonly accepted. The debate over the dead is nothing new, indeed, Francis Amasa Walker, superintendent of the 1870 Census, estimated that the number of male deaths was “not less than 850,000.” As I have written before, the debate should not just center on soldeirs but on civilians as a direct result should be calcualted as we.

One interesting thing about Francis Amasa Walker’s 1870 Census study, though of course imperfect, was the descreptency between its data and the trend of the 19th Century. From the article:

The final Census count put the population at 38,558,371, up just 22.6 percent from the count in 1860. All previous 19th-century censuses had documented decennial growth rates between 32.7 percent and 36.4 percent, a near-constant rate of increase that 19th-century

Previous post: The Civil War, A Visual History: Rare Images and Tales of the War Between the States