I wasn’t happy with my very limited sample of about 100 Patriotic Civil War era envelopes that I looked over with regard to testing Gallagher’s thesis that support the notion the war was seen more as a struggle for “union” than anything else. Of the those 100 not one depicted slavery. So I spent some time recently searching archives praying I would find more than I had before and I discovered some excellent resources.

I came across the McAllister collection of over 7,000 Civil War era Patriotic Envelopes. They were collected by John A. McAllister during the outbreak of war and until 1862. Seven thousand in just a couple of years and predominately published in the North. According to the introduction page of the archive, the collection “provides valuable information about the politics and culture of a society at war and about mid-19th century consumer and visual culture.” The prominent themes present in the collection include historic and military figures, as well as “military scenes, state seals, cartoons, Liberty, American eagles, flags, and other military and patriotic emblem.”

The archive also contains an extraordinary collection of Recruiting Posters, Playbills, Song sheets and Valentines, and a lot of it is online. Here’s the link to The John A. McAllister Collection: Civil War Envelopes. Also, a good PDF article is here on the McAllister collection. There’s also another collection, Thomas Hale Collection of Civil War Patriotic Envelopes that is useful. 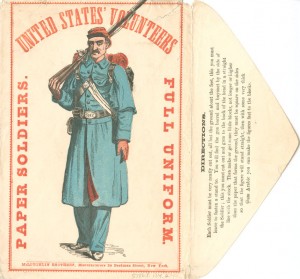 The images above and to the side are from the Civil War Paper Soldiers Collection, that contains a nice online catalog that deals with various topics and not just soldiers.

If you are a graduate student or senior level history major, and you need to find something to write a paper on, I would highly recommend looking at the above collections as well as the Civil War Prints & Ephemera digital archive. Very good stuff and lots of primary documents.

Now, back to the idea that these patriotic envelope covers play more to the theme of “union” than anything else. If you look at the Guide to the Collection of U of Mass Civil War Patriotic Covers, though nothing available online, it has an excellent breakdown of the represented themes found on thousands of envelopes. Clearly a lot of themes and indeed a good variety of what they label as “Blacks” comes up with many sub-themes. There are numerous envelopes that deal with Slavery as a “cause” of the war, among them The Innocent Cause of the War. As described by the archive, “This patriotic cover (envelope featuring images and slogans) was printed during the Civil War to promote the antislavery cause and depicts a young African American man.”

So indeed there are a significant amount that deal with “blacks” and some that deal with “slavery.” However, I should note that Patriotic themes do by far dominate the archive.

Previous post: What Happened to Civil War Soldiers After the War?